Brigstow is a relatively prosperous city with a wide and diverse economic base including the creative industries, which has allowed it to withstand the recent economic recession. It has an international airport 30km to the south west and is well connected by motorway and main line rail to London and the rest of the UK. Brigstow has two large and successful universities, a thriving arts and music scene and is a popular tourist destination for overseas visitors.

However, while much of Brigstow is doing well significant parts of the city are struggling with poverty, crime and poor health. Some of the most prosperous areas of England sit side by side with some of the most deprived. The English Indices of Deprivation gives a score of multiple  deprivation derived from 7 measures of deprivation. These are calculated by neighbourhood ( technically known as Lower Layer Super Output Areas).  Brigstow has 32 neighbourhoods amongst the most deprived 10% in England, of whom 14 are in the most deprived 5%. The 32 neighbourhoods in question have a population of 60,455 people. Many of these neighbourhoods have qualified for special funding from the European Union and the previous UK Labour government, due to the high levels of poverty, however these funding streams have all now been cut.

There are significant demographic changes taking place in Brigstow. The influx of international migrants from Poland and Somalia has already been referred to. This has contributed to a 12% increase in population in the last decade. The ethnic group with the largest increase since 2001 is the ‘White Other’ which includes Eastern European, increasing from 10,124 to 21,950. On census day in 2011, 5.1% of households in Brigstow had nobody who spoke English as a main language. 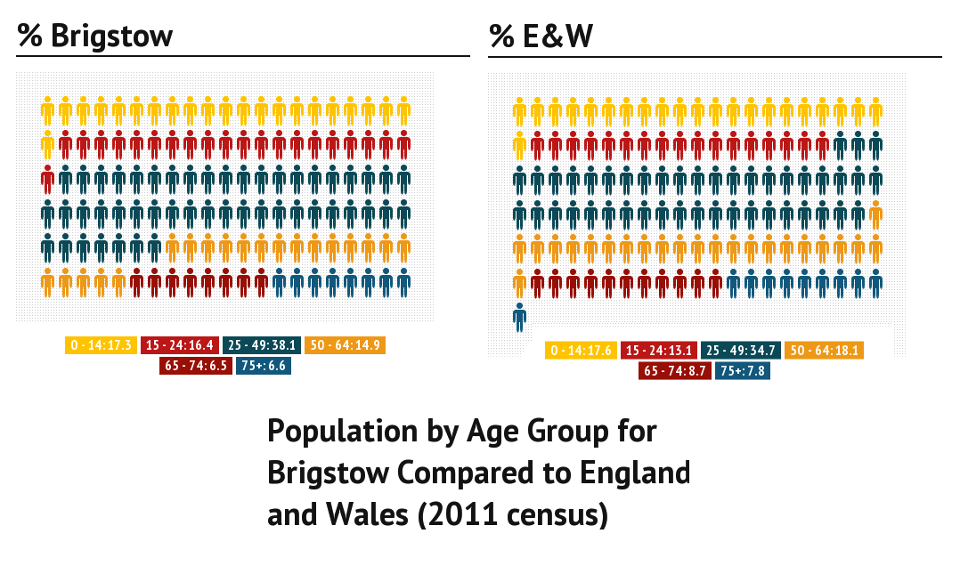 These figures conceal a substantial rise in the numbers of children since 2001. In the age group 0-14 there has been a national increase of 0.6% but in Brigstow the figure is 7.9% (5400) while in under fives, Brigstow has seen an increase of 26.5% (6200) compared to 13.1% nationally. The actual census figure for 0-19 year olds was 6,900 higher than the planning estimates for 2010 that have guided policy. For the under 5s there was an actual population excess of 2,000 above the planning figures. This has significant implications for planning services. At the other end of the age range, Brigstow has seen an increase of 20.3% in those aged 85 and over (1500 persons) compared to 2001 (national increase 23.3%)

There is a much greater degree of diversity in the under 16 age group than the adult population, 22.5% are from BME backgrounds, more than twice the rate for the whole population. Inequalities between ethnic groups can be indicated by considering the educational performance of children in GCSEs. The data below shows the percentage of Brigstow children who achieved 5 or more passes (A-C grades) including English and maths, compared to the English average (2008-09).

The recent economic difficulties has affected unemployment rates in Brigstow. Using the International Labour Organization definition of unemployment the Brigstow rate is 7.9% compared to a national average of 7.7%. For the region within which Brigstow is located, the unemployment rate is rather lower at 6.2%. The impact of unemployment tends to be concentrated in the deprived areas (LSOAs) mentioned above. There are 30 such neighbourhoods where over 25% of the working age population is in receipt of out of work benefits. These neighbourhoods are concentrated in Northmead (north Brigstow), St Peters and Sandhill (central Brigstow) and Tipwood (south Brigstow, adjoining Stilwell)